We had a lovely party!

The weather was lovely, the food was good and everybody was happy :)

We started the party by decorating the  little crowns for the teddies. We had one boy as well, an unexpected guest, and he decorated a plain paper roll as the pink one was too girlish :D (I painted the crowns and covered in mod podge the day before). 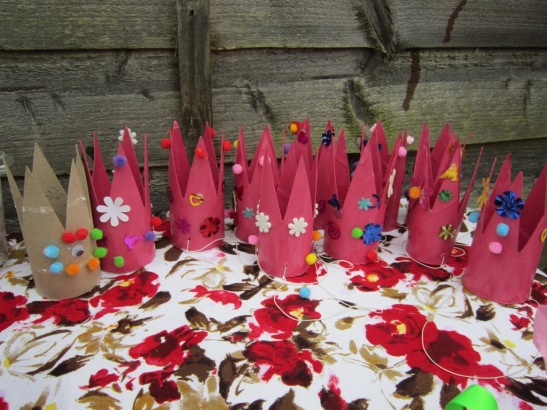 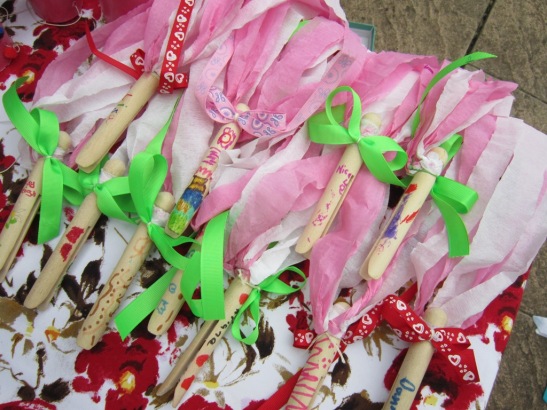 And then the children  got to decorate

a wooden peg. I attached some ribbons of crepe paper there to make the game “Musical Statues” more fun.  So waving the ribbons they danced to the music played by some parents, conducted by my husband. We gave the parents our 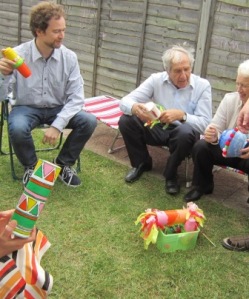 handmade musical instruments, rather than just use a CD.

After that we playd “What`s The Time Teddy Bear?”  The children lined up and two of them stood at the other end of the garden. The children asked: What`s The Time Teddy Bears” And the two girls answered: “two o`clock” whilst the other children had to make two steps towards them. The game continued until the Teddies said: Dinner time! and started to chase the children. Oh that was fun. The girls were screaming and laughing!

Our third game was a Teddy Bear`s Shop. This game is actually called: “Paint Shop”. One child was the shopkeeper and one a customer, and the rest of the children were teddies sitting on the shelves of the shop. The shopkeeper whispered a name of the colour into each child`s ear. Then the customer came to buy a teddy. She asked: Do you have any green teddybears? The  “green teddy” had to stand up and after paying (tapping the shopkeeper`s hand) the “green teddy” ran away and the customer was supposed to catch her. If she caught her, the “green teddy” was the new customer.. if not then she had to go back onto the shelf. As the game was new to the kids I should have cut out different colour teddies from cardboard and given them to each child. That way it would have been more visual and helped the kids remember what colour teddies they were. But some of them started to look for those colours in the teddies they had brought with them, so they all still had a lot of fun.

After eating, the children got their “party bags” which weren`t bags at all. Together with the book they got a big piece of chocolate for themselves and a smaller one for their teddies. With Annabel`s help I made little baskets to hold the slice of chocolate cake, and as it was a Teddy Bears’ birthday party, we also gave them all a copy of a Paddington Bear book.  Well, it  is between Paddington and Pooh, who is the most famous bear of all.

The chocolate is from Estonia and its name is “Mesikäpp” (the direct translation is Honeypaw). In Estonian folklore, the word for bear is “mesikäpp”, which you would use when talking to a child, although occasionally older people will also use the term as well. We also have lots of  folklore terms for a wolf and a fox.

I found the instructions of the  origami box here. I just added the handle and Annabel`s decorated bears.

And here are some more little paper roll crowns:   lilla a , My Shtub, Creative Jewish Mum, Red Ted Art . The idea is the same but all the crowns are so different!

This entry was posted on June 6, 2011 by mermaid in birthday and tagged sünnipäev.